Andy, on top of being the absolute best husband and support system an internet pinball camp director could ask for, is NWPSC’s Culture Counselor! He will also be coordinating the watch party of ‘Pinball Summer’ on Sunday night at 8:30pm PST via Facebook Live in the group campsite, and simultaneously hosting the sure to be heckle-heavy chat room on Discord. Let’s learn more of his mojo, in his own words:

Andy is a true Northwest native, growing up in the suburbs of Seattle. When not enjoying the great outdoors with his family, he could usually be found in front of the Nintendo in his basement. Other recreational activities often included methodical, repetitive tasks, such as origami, crochet, and building sets. With two older brothers as mentors, Andy is also highly competitive and enjoys games of skill and strategy. No wonder he was drawn to pinball machines and their incorporation of tactile repetition alongside gaming procedures. He's been playing pinball competitively since 2005. He has been on the lineup of the Shorty's Silverball Slayers since the Monday Night Pinball league began in 2014.

Andy is often still thinking about pinball. He enjoys writing about pinball and is published several times in Skill Shot: Seattle's Pinball Zine. He also creates his own content for distribution in various forms (such as a wallet-sized video mode cheat-sheet, various pinball meme stickers, and content for his tumblr [hamdrewburglar.tumblr.com]). He enjoys the strategic nature of the game and attempts to identify new exploits and document lesser known features of game code, sharing his knowledge with anyone who cares to ask, as well as publishing on rule-sheet wikis on TiltForums.com

When not in front of a pinball machine, Andy works in the hospitality industry, with a focus on creating craft and classic cocktails. Merging the two, he created "Doctor Burton's Pinball Mojo," an infusion of herbs in alcohol meant to be taken as a shot before playing a pinball match. A little alcohol and a lot of caffeine go a long way in the fierce competitive pinball scene. He also created a medley of non-pinball cocktail kits, including original barrel-aged cocktails and bitters.

He would like to thank the Twitch pinball streaming community for helping maintain his sanity during Coronavirus Lockdown.

Seattle, WA (soon to be Portland, OR)

When did you start playing pinball?

I started as a child during my family's summer vacations in the arcades of Seaside, OR. I received a modest budget from recycling cans for a nickel apiece. However, with pinball priced at 50 cents per play, I found my money was better spent on a game of Skee Ball for a dime! Pinball was an enticing game, with the blinking lights, call-outs, and the loud KNOCK of a replay earned by a skilled practitioner. I learned quickly to look for the flashing "start" button to scavenge a free game every once in a while. In college I tried my luck at earning replays, with occasional success. Later, I practiced the same machine every day before work at a nearby arcade, and finally honed my skills to the point where I could reliably play 5-10 games for buck. I finished 4th place at the 2005 Shorty's Annual Pinball Tournament, the very first pinball tournament I ever played, and I've been hooked ever since!

What are your top three games?

What are your favorite hobbies?

I enjoy making (and consuming) classic cocktails, and inventing my own. I also enjoy retro games, including modern remakes/remixes. During quarantine I have been speedrunning Final Fantasy Randomizer for NES (finalfantasyrandomizer.com).

Any pinball superstitions or competition rituals?

Dress for success (preferably a Matador's cape), queue up "Heartbeats" by GRUM (or anything else on my short pinball playlist), drink a shot of Pinball Mojo, step up to the game and flip the flippers a couple times before plunging, and visualise success.

Who is a role model to you, pinball or otherwise?

Lonnie Langford, the original NW Pinball Yeti. He was always keen to let me join his games, even when his turn would last 30 minutes and mine would last 30 seconds (I just thought of it as a way to get better value for my 50 cents).

What pinball event (local, regional, or national) are you most excited to see the return of?

PINBURGH!! Unfortunately, due to the event's cancellation this year, it might not be possible to get tickets to next year's event, so I might have to wait until 2022 to play another Pinburgh. Fortunately, that frees up tournament travel expenses to play in other national events such as EXPO. And of course, the Tacoma NWPAS will always have a place in my heart! 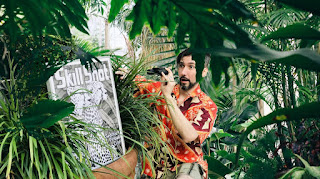