It is an incredible joy to have Gene on board as our Photography Counselor! The schedule will be updated shortly to reflect the addition of our Friday night photo gallery opening, and tournament circuit photographer-at-large Gene has been working hard in his San Francisco cabin, collaborating with over a dozen talents from campsites around the country to bring to our eyes an incredible collection of images of pinball playfields, spirited competition, and unbeatable camaraderie that they have shot and amassed over the years.

will also include links to the Babes In Pinland documentary (plus and a special interview with director Candace Fields!), a retrospective from Skill Shot: Seattle’s Pinball Zine, and more offerings as we secure them!

Tune in at 6PM PST as NWPSC interviews Gene X Hwang right here in the group campsite on Facebook Live! In the meantime let’s hear from him, in his own words:

Gene X Hwang is a photographer and co-founder of Orange Photography and first discovered pinball as a kid when he played to pass the time at the laundromat while his father took care of the family laundry. His first favorite game was Cheetah, which he now owns. During a trip up to Portland, OR in 2012, he came across the Rose City Showdown and that re-sparked his interest in pinball leading to joining the newly formed San Francisco Pinball Dept. and competing in tournaments and eventually running tournaments as well. His other interests include biking, Polaroid photography and biking around town. Currently he has been documenting life during coronavirus since shelter in place began in San Francisco through his daily photo journal updated daily at: http://bit.ly/coronavirusSF.

When did you start playing pinball?
I played as a kid (Cheetah was one of the first games I remember playing while my dad did laundry at the laundromat) but got back into it in 2012

When you aren’t capturing pinball, what are your favorite subjects to shoot or styles of photography?
Probably documentary and or fitness - though anything with people is always fun

Any pinball superstitions or competition rituals?
Not that I can think of

Who is a role model to you, pinball or otherwise?
I used to joke that Eric Wagensonner was my pinball mentor when I first started to compete 😂

What pinball event (local, regional, or national) are you most excited to see the return of?
Golden State Pinball Festival and Pinburgh 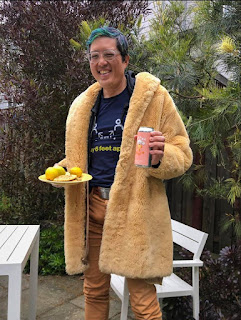