Ashley and Chase will be rolling out The Ultimate Pinball Game Show! tonight at 7PST! Get thee to www.geekgamer.tv or www.pinballnight.com to watch great players nationwide duke it out for great prizes and campground fame! Let’s hear from Ashley, in her own words:

Ashley Weaver discovered the wonderful world of pinball when she moved to Renton, WA with her husband Tim. They went to a tournament at 8-Bit Arcade and were completely hooked.
In 2018 Ashley joined forces with Chase Nunes of GeekGamerTV, and they've been casting pinball and hosting seminars together ever since! She sorely misses the pinball community and is over the moon about Northwest Pinball Summer Camp. When she isn't preparing for the big weekend, she plays pinball with Tim while their two dogs distract them.

When did you start playing pinball? At a Holiday toy drive tournament December of 2016.

Outside of pinball, what are your favorite hobbies?
Japanese RPGs, smoking meats, eating good food, and playing Rockband with Tim.

Any pinball superstitions or competition rituals?
I listen to my super upbeat pinball playlist! (Some of my power songs are "Honey" by MC and anything by Cardi B.)

Who is a role model to you, pinball or otherwise?
My pinball role model is Alexa Philbeck. She's a gracious competitor and encouraged me to focus on controlling the ball.
One of my personal role models is Margaret Atwood. She uses science fiction and dystopian fiction to criticize society's flaws, and she's also an inventor.

What pinball event (local, regional, or national) are you most excited to see the return of?
I have to be a little selfish and say that I can't wait to start running my own weekly tournament at 8-Bit Arcade again. I miss my regulars and the spirit of camaraderie they provided.
I also REALLY missed NWPAS this year!

🌲Knock it out of the park, Babe! NWPSC wouldn’t have been anything near what it was without your love and enthusiasm.🌲 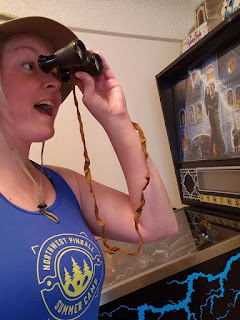