When did you start playing pinball?
It was in late 2008 that I fell in love with pinball in a big way. I was 23 and had just quit my job to go traveling by train for two months. When I came back home, my boyfriend and roommate at the time had found pinball in my absence. They had picked up a copy of Williams Pinball Arcade for the Wii and started seeking out pinball in the wild. Shortly after I got back from traveling, we’d discovered Skill Shot zine, made our own lists of game locations for Tacoma, and I signed up for my first pinball tournament (Powder Puff 2009 at Shorty’s)! 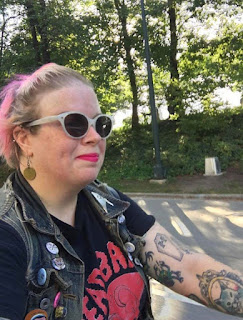 What are your top three games?
It changes a lot, but three that have stuck with me for years are Monster Bash, The Addams Family, and Centaur.

Outside of pinball, what are your favorite hobbies?
I love to knit, draw, read, write, and obsess over music. In my free time I write reviews for records, books, zines, and live shows for Razorcake Magazine, as well as Maximum Rocknroll. I’ve written for New Noise Magazine in the past where I’ve interviewed bands from around the world. I also make music podcasts for Razorcake, and co-host the Skill Shot Pincast.

Any pinball superstitions or competition rituals?
Not that I can think of! I have gotten more used to going first in competition and sometimes even prefer it, whereas when I was cutting my teeth in tournaments I always wanted to go last to see what I was up against. My only rituals are probably queuing up music, adjusting my shirt, and wiping my hands. 🙂

Who is a role model to you, pinball or otherwise?
Some of my musical heroes are people like Erica Freas, and Kepi Ghoulie, and Andrew W.K.. Writers that have the biggest hold on my attention are Aaron Cometbus, and Keith Rosson. Pinball heroes are folks like Zoe Vrabel, Jon Chad, Greg Dunlap and Nicole Reik, and Hannah Holmberg-Hatch. With the exception of one person on this list, these are all people I consider friends. And they say never meet your heroes!

What pinball event (local, regional, or national) are you most excited to see the return of?
Pinburgh 2021. I couldn’t believe I got in for this year, and am stoked that my ticket will roll over to whenever it’s safe for public gatherings again. Pinburgh is the best because it turns into an international family reunion. But also every Babes in Pinland meet up because everyone there is the best person

🤟🌲Thanks for camping, my Iron Maven!🌲🤟