If you aren’t familiar with Jackbox Games and the joy of playing socially distanced party games - welcome to the future! To play, each player needs a phone, tablet, or other web-enabled device to use as their controller. When you start a game, you’ll be given a unique room code on your screen. Just pull up Jackbox.tv on your device’s web browser, and enter the room code to play along.

NWPSC is pumped to welcome two Jackbox Counselors (hopefully enough to give all campers that wish to a chance to play, but please be patient if they have a queue of interested players at any given time) who have been bringing camaraderie to our local NW players with their game offerings all throughout quarantine - it’s been a great comfort in a time where we all miss each other and need a little competitive thrill here and there.

Find Bre and Clinton on their Twitch stream, Saturday night at 8 PM PST! Lets say hello to them:

Clinton Peterson (Twitch.tv/DoczillaSWL), in his own words:

Hobbies outside of pinball?
PC building/gaming, trailer camping with fam, flying my drone.

Pinball rituals?
I switch my stance everytime I lock a ball (which foot is forward).

Role models, pinball or otherwise?
My wife Andrea is a teacher and the hardest working person I know (she is also way better than she thinks she is at pinball, she whoops me during most tournaments)!

Pinball event i'm looking forward to most?
Tie between setup day at NWPAS and starting the monthly youth tourney I run at 8bit back up.

Let’s chat with Bre (Twitch.tv/killabreezplays), bringing her Jackbox hosting panache to tomorrow night’s festivities, with a side of fundraising! In her own words:

Bre's from Portland, and moved up to Seattle 5 and a half years ago. She's a bit of an introvert unless she's had a few. She loves pinball and misses it a lot and almost cried when she realised LOTR would not fit in the house in a reasonable manner. She has an ridiculous obsession with make-up and stage blood.
She streams on twitch for charity and will be doing to this weekend during camp while playing Jackbox games and being silly. If you're lucky you may get to see one of the 7 Guinea pigs she currently has. (Yes, 7. 3 of them are tiny babies). While we're playing games, we're also taking donations for BLM groups. Every 5 dollar donation gets you entered into a raffle for the grand prize of 100 dollar gift certificate toward a tattoo done by the wonderful Stephanie Hanlon at Studio Arcanum. There will also be computer game prizes as well! Grand prize will be drawn at the end of the stream.

When did you start playing pinball?
I started playing pinball when I was 5. Addams Family at the Ostrich Ranch my Great Aunt owned in the Dalles, OR.
Ball got stuck, and I thought I broke it. Didn't play pins again until I was 19 at the Quick Stop in Portland,
and it was all downhill from there.

What are your top three games?
Ripleys Believe it or not, LOTR, CONGO.
(adding GOT because I can't count)

Outside of pinball, what are your favorite hobbies?
Math, Video games, painting, writing, singing.

Any pinball superstitions or competition rituals?
Ha. Sports bra, tank top, ear buds, hip hop, one drink, hair up, pants with back pocket for phone.
Nothing on wrists or fingers (ouchies for slap saves). I like to pay for my own games. Can't have half
credits on the machine when we start. I will put more quarters in to make a full credit even if we don't need
it.

Who is a role model to you, pinball or otherwise?
Not to be a kiss ass, but I have always appreciated Alyson Rae for being a gracious competitor.
She not only has been one of the most welcoming individuals in the community but continues to be supportive
both on and off the pin-field, is a generous human, and is one of the gemmiest amongst gems. (***Camp Director’s note: D’AAAAAW...😭🥰🙏🤟)

What pinball event (local, regional, or national) are you most excited to see the return of?
NWPAS. It's the biggest and the bestest and you get to see EVERYONE, play ALL THE GAMES, and do ALL THE THINGS.

🌲🥳 Thanks, Counselors - you’re the BEST! Have an awesome time playing, everyone! May the odds be ever in your favor! 🥳🌲 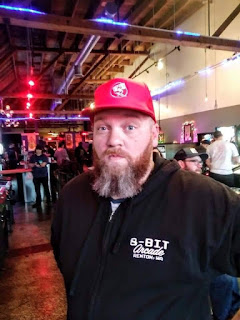 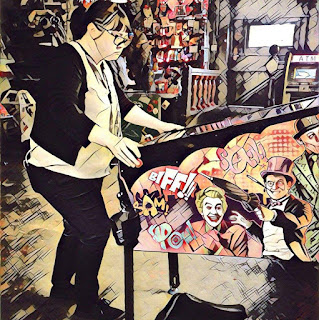