Thanks to everyone for playing in the Northwest Pinball Summer Camp! Online Tournaments on Friday!

July 13, 2020
From Arcade Counselor Michael Adcock:
"We had 22 players participate across the three games including:
Adam Gomez, Alan Wiley, Andrew Pancoast , Anthony Sitaras, Austin Arlitt, beez., Chase Nunes, Christien Miller, Dana Valatka, Ditto Depew, Elliott Johnson, Jason Dowell, John Garnett, Jonathan Soon, Laura Sheptock, Kelly Phair, Mark Bjorkquist, Michael Palero, Nickie Danyell Dowell, Sebastian Grinke, Therese Edwards, and Tim Collins! I know we had folks all the way from Chicago, Ohio, and Viginia, and probably other locations not mentioned on the stream. That's a lot of campers! ⛺
Congratulations to Austin Arlitt (1st,1st,2nd)🥇, Chase Nunes (3rd,2nd,1st)🥈, and Andrew Pancoast (2nd,3rd,3rd)🥉 who managed to place in the top 3 spots on every game! 🎉
Congrats also to Dana Valatka with two solid 4th places on Cirqus and Gofers and Mark Bjorkquist also at 4th on TOTAN! 🎉
Full score screenshots were posted previously, but the top 8 scores for each game are below, along with the full rankings.
Special thanks to Zen Studios who provided the codes for players who needed them for the games we played in the tourney, as well as prize codes for the winners. (I'll be sending an email out to winners after this, to coordinate with our contact at Zen). And thanks to Ashley Weaver for contacting Zen and getting that sponsorship!"
Thanks for entertaining players nationwide, Michael and Ashley!
Wanna play with Michael year round? Email adcockm@gmail or follow him at www.twitch.tv/adcockm 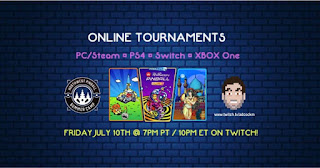 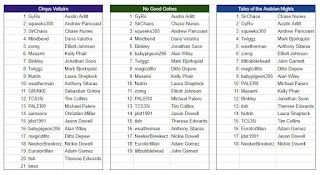